Dawn revealed a lovely view of the jagged shore of this end tf Lake Nasser, which is called the Aswan dam and it promised to be another scorcher.
At midday with the sun directly overhead and shade a premium we got to Aswan and the ferry nosed to the key just lone enough to get the immigration officer on board and then it reversed out and stood idle off shore.
It took two hours before everybody had had their passports checked and the passengers down in the tiers of upright seats in third class were getting impatient – but we finally returned to the key and tied up.
Our fixer, Kamal recognised us and helped us hump our gear to the quay and organized a couple of long-suffering porters and haggled the price down till he was satisfied and we joined the throng of passengers heading into the clearing hall.
The usual mad shouting crush was in full swing and everybody had to get their luggage through the scanner. A small push me – push you between two overheated porters turned into a free for all, that had porters dropping luggage and flying in, fists flailing. A lot of old scores were being settled!
We used thevacuum all this offered and got our gear through the scanners and circumventing the poor old lady whose trunk-size carton of rusks had snagged on the conveyer, torn and exploded, spewing Sudanese dry bread everywhere!
We were through and Kamal took us into Aswan some ten kilometers away where we booked into a tourist hotel on the Nile.
It was after six but still sweltering and we decided to go for a swim in the pool hotel. Across the Nile could be seen a tall cloud of dust and sand but still distant. We watched for a bit and realised that this was a desert sand storm and watched as it ten miutes, covered the buildings on the western shore and swept across the broad river and was upon us. We jumped into the pool and stayed there for a long while as branches snapped from trees and light fittings came crashing down. We stayed in the pool for as long as our eyes held out and then scuttled off to our rooms.
– Tango 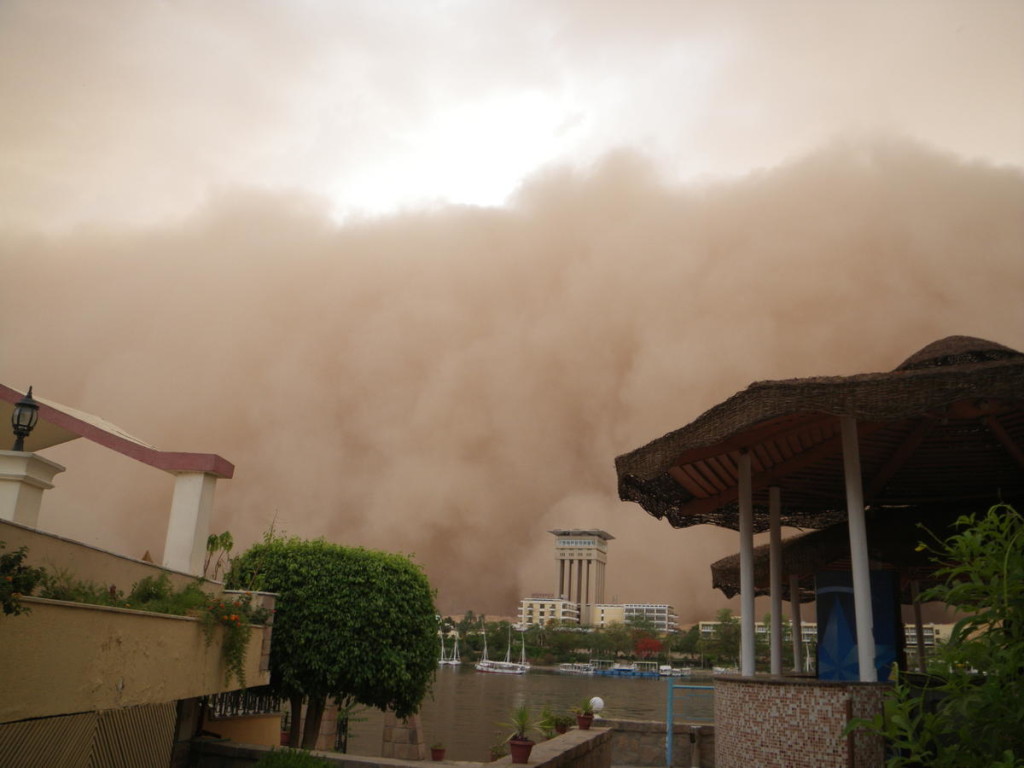 Sandstorm in Aswan – we jumped into the pool