Setting off early, we thought we could make the capital in good time despite the mileage but one thing we have discovered is that you cannot travel swiftly in Ethiopia
The scrub changed to lush green sub-tropical vegetation just north of Yabello and so the population density inrceased – ultmately it is like riding through a two hundred kilometer long village – 90 odd million people in Ethiopia and I think we passed at leatst 89 million of them today!
The roadside teems with donkey carts, goats, cattle, dogs, horses and people – walking, standing, sitting and the road belongs to everybody, so speed is impossible.
The fertile lusness gave way rather suddenly to a hot and windswept plain as we apraoched the capital and the population thinned a little, but the truck traffic increased and we took a long time to negotiate the last thirty or so kilometers into the city, arriving in ethe dark again.
– Tango

Descending from winding hills to the flat scrub plains of Ethiopia, hornbills swooped across the road into acacias. Purple starling chattered to each other at one stopping point, shining brightly in he sun, beady eyed. When a small, pouch like nest was spotted in a low acacia bush, I peeked inside. Unexpectedly, two small cream brown flecked eggs neatly laid and softly cocooned. A small treasure from what small bird I couldn’t identify in such harsh, dry, dusty conditions. Everything survives by some miracle or lives off something else in Africa’s perfect cycles. In the words of poet/songwriter Syd Kitchen, ‘Africa’s not for sissies’. Leaving Ager Maryam, we saw large baboons with huge manes on the verge, right in the middle of town. Scavengers off the town pickings and looking uncomfortably humanoid and swaggering. No one seemed to mind them and life carried on as if this is how it is supposed to be. We were warned, and for once it proved to be right. Beware of the livestock and humans crossing the road. No road sensibility existed and we constantly had to be on our guard to dodge these hazards or pay the penalty.
– Sierra 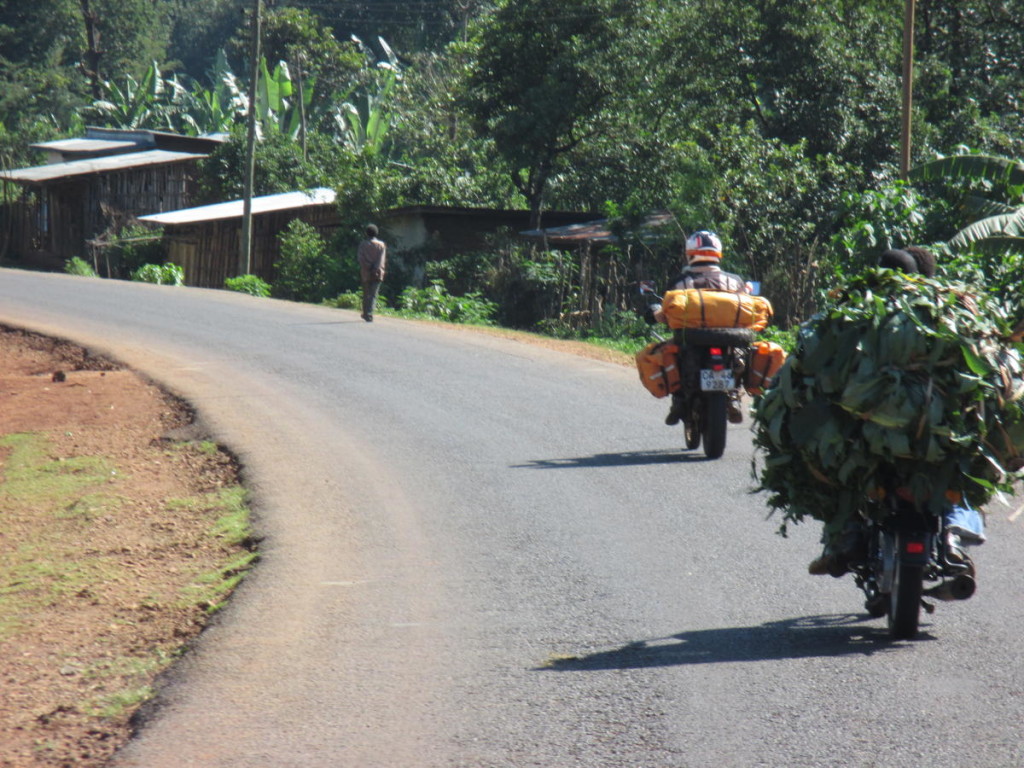