Unfortunately both Kilo and I have succumbed to a stomach bug and that does leave one flat and uncomfortable. Luckily the amenities are good – there are worse places to have the shits!
We went down to the local KTM bike shop, which carried an impressive inventory of their expensive gear but needed to get certain things and so paid up for them.
Some further shopping being done, we returned along a route where they are doing some impressive new road work developement work. All aimed at getting easier access to the shiny new malls that are springing up.
We bought a second hand tyre from the stock pile that our host has built up and exchanged Kilo’s rear tyre for it, as it had worn too much for our liking, though we will bring it along as a spare.
– Tango

Lots of domestic herds, humped back cattle, goats and donkeys with the dark crosses across their shoulders all under cloudy skies. We saw a large martial eagle perched in acacia tree by the side of the road. Stopping for a break under a thorn umbrella we could see busy robin like birds with huge communal nests. Then outside Nairobi, one of us spotted a small impala herd by the road. Pin tailed wydahs swooped in looping flight and lilac breasted rollers twisted in flight after insect life.
Everywhere we saw the domestic food of Africa, chickens of all varieties. Chickens tied up, chickens penned, chickens being carted on bicycles, chickens in and on buses and cars. There were free roaming chickens in dusty villages. On motorcycles there were chickens, being carted along sometimes in twos or threes. It seemed Africa’s taste runs on village chicken and Nyama choma or meat with whatever local vegetable delicacy of the day is prepared. As we approached the Ngong Hills area, we saw a huge hammerkop stalking through the green grass and low acacia of Kenya. At some ungodly hour of the morning, whilst camping on the lawn, the local dogs from the surrounding villages began their ancestral howling in unison, a weird and motley pack call which reached a crescendo then it was back to individual dog discussions and challenges across the busy night of Nairobi.
– Sierra 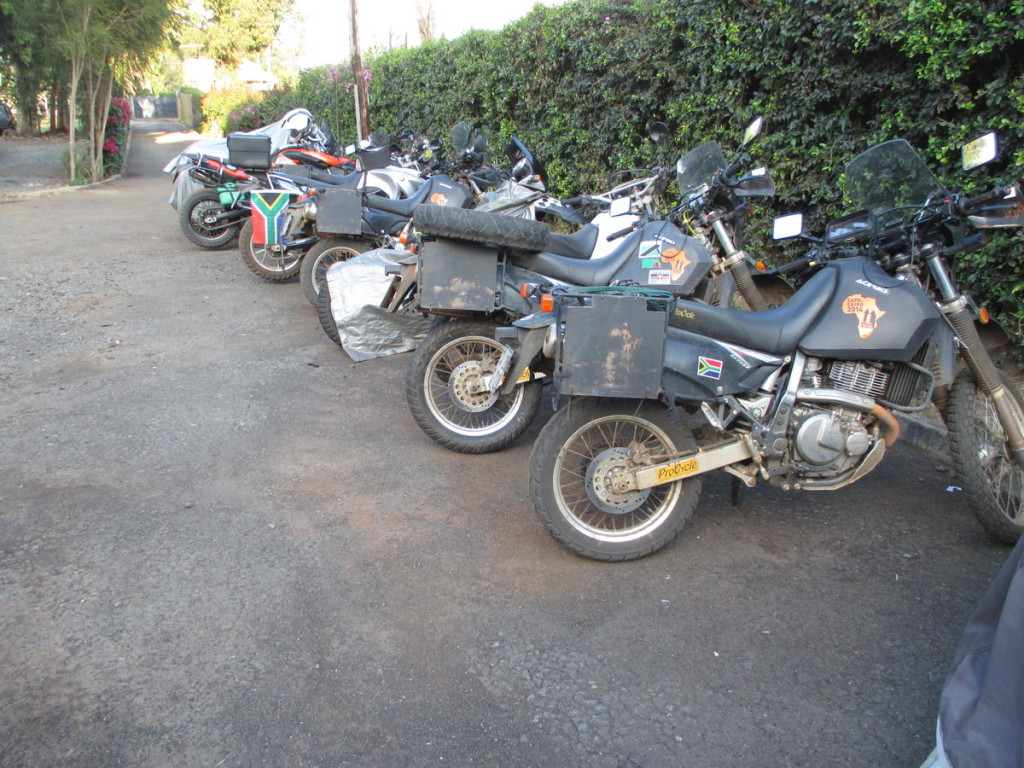 Bikes lined up at Jungle Junction