We left the farm just as it started raining and headed for the hilltop town of Iringa. The towns are getting bigger the closer one gets to Dar Es Salaam.
Iringa is vibrant mix of colonial architecture, half-finished buildings and crowded streets and pavements clogged with people busy with their daily lives.
We fueled up and found an ATM, for cash and turned off the A7 which heads toward the coast and Dar Es Salaam and found ourselves on the spanking new road, the A104, which is in the process of completion and wherever the road gangs are busy, the Chinese road engineers can be seen.
The road was lovely and descended onto the much drier region of central Tanzania.
Here we saw our first Masai cattle herders driving their plump beasts across the plains. The road is empty as the trucks have no business on this road and it is not the main tourist season, so there are very few other vehicles
It stopped raining after and hour or so and one soon dries out in the heat that follows. We crossed the Mtera dam wall and stopped in a dusty village for a Pepsi, which seems to be the dominant brand here, and as always, were greeted with friendly curiosity.
There was a gravel section of the unfinished road closer to Dodoma which we found fun and the sky closed in as it tends to do in the afternoon. We discovered that I had a rear wheel and handily it stopped raining as we got to the business of repairing it. We were far from anywhere but soon had an audience of curious youngsters who once we had tightened the last bolt melted away, satisfied with there afternoons entertainment. We continued to the plains town of Dodoma, still sodden, and chose the first establishment on our very handy and comprehensive accommodation list – the New Dodoma Hotel – a three story colonial edifice that, with it’s comfort, was just what we needed.
– Tango

Maasai herders were again common along the way, a spectacle with their red or blue checked cloth, stick and long scabbarded knife. They were wearing car tyre sandals, protection against the long acacia thorns. Goats and cattle. The cattle appear to be a breed of Afrikaander, with pronounced hump, their colours widely mottled blacks and whites as a result of intense interbreeding. Trevor rode through an amazing column of marching ants at least 50cm wide which was black right across the road.
– Sierra 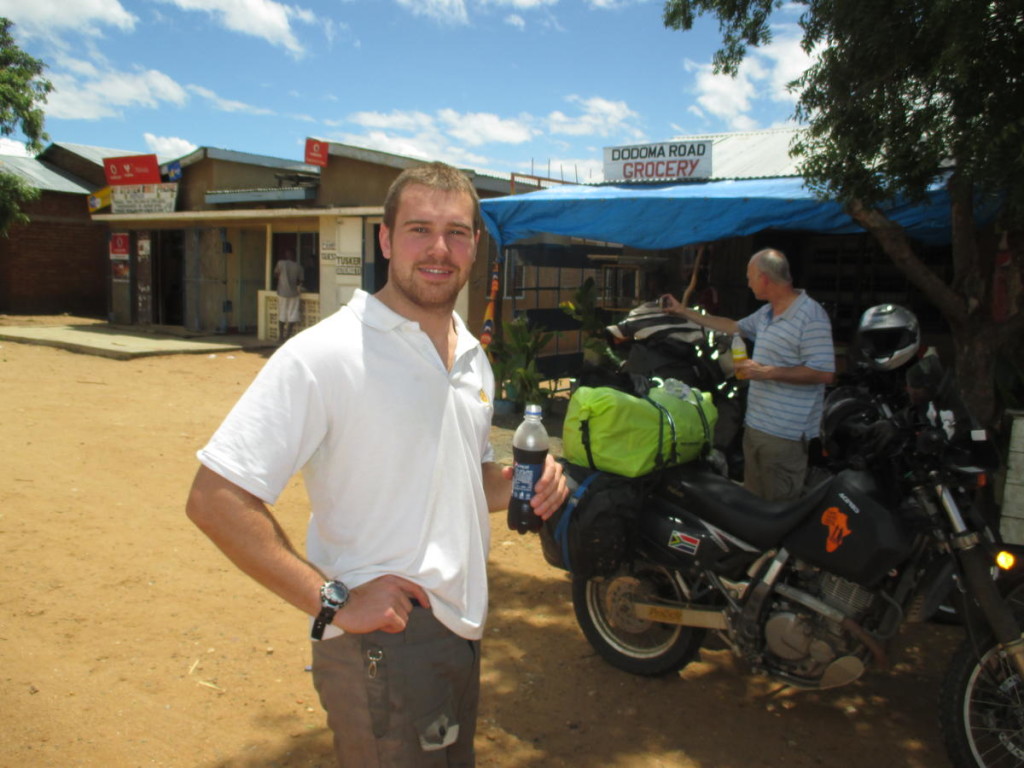 Stopping for a coke at a very festive cafe