Completely overcast conditions with what looked like to us a definite threat of rain, was discounted by the locals who promised no rain. Of course it started to rain almost immediately we set off. We were soon soaked and as we were climbing up a plateau and were then in thick mist, we could not appreciate any view.
We stopped for a cup of sweet hot tea at a small shop, the first we have seen like that and it showed that we were aproaching Tanzania.
The sun came out for awhile and we were greatly cheered but just as we could see Nakonde in the distance, which is the last town before the border it started to rain again.
One can tell when there is a border ahead because the trucks start to line up on the side of the road in endless queues, waiting their turn. The border here is still the old style and has not been modernised at all and so is a cluster of decaying buildings and outhouses with trucks parked every which way, some broken down, some stuck in the quagmire.
We parked on a pavement and got to the business of identifying which of the cluster of people around all talking at once was; the money-changer and which is the fixer, whose help is needed for the whole process, which is slow but always pleasant as all the officials are friendly and inquisitive to our mission. We chose our personnel and followed muddily from building to building and an hour and a half later we were escorted to the gate and wished a good journey – and we were in Tanzania – a completely different world, just twenty meters from the last.
Now there were cars and taxis and motor cycles everywhere and three wheel tuk-tuks and trucks, so many trucks, and vendors and people standing in the road talking and laughing and general noisy chaos.
We needed fuel and so turned into the first garage, which had old style fuel pumps marked in khoki; petrol and diesel! Don’t bother asking for unleaded!
We filled up amid the small crowd who had gathered around us and eased back into the rain and down the muddy street and through the border town of Tunduma.
The rain finally abated further on and we made it to our lodgings at the very comfortable but strange Ifisi Community Centre, just short of the town of Mbaya where we appeared to be the only guests.
– Tango 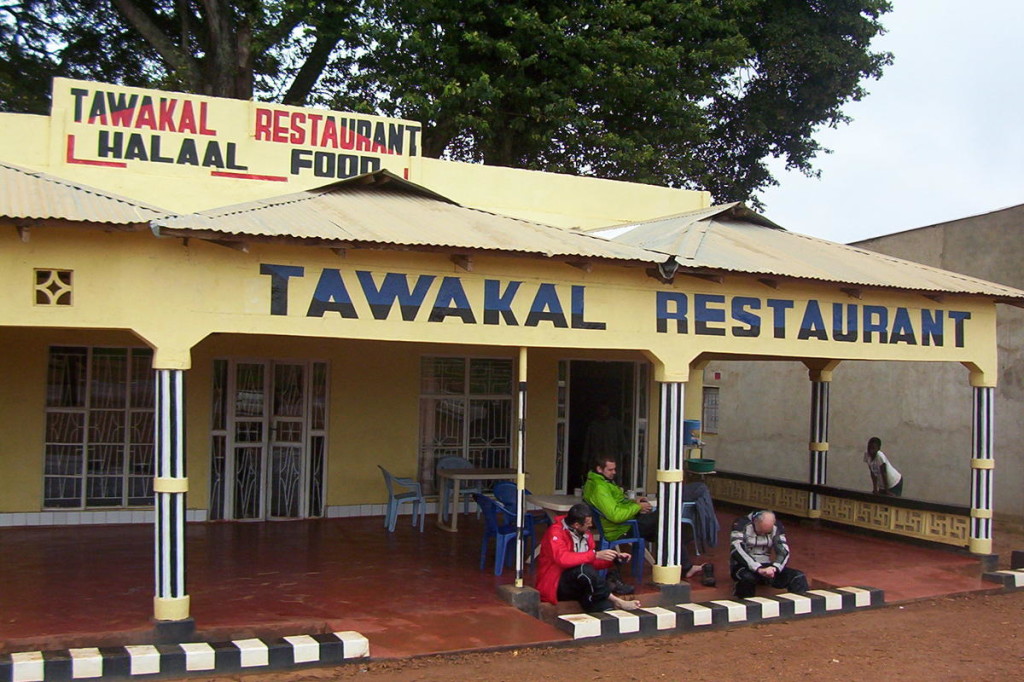 Everything is transported by truck and most are coming down from Tanzania on the great north road that we are using to go up. The road is very narrow and the habit of the truckers is, if they break down, which is very common, then a few bushy branches are cut from the nearest tree and put some distance behind and in front of the truck and this acts as warning triangles. Truck also crash frequently and we saw two overturned trucks and one that had gone over the edge on a hill and into the forest. The truck crew are seen at these crash sites, camping with a little fire to await rescue we assume, which would certainly be days if not weeks away.
Our lodge for the night is a little place on a hill outside Mpika, run by a cheerful and talkative German host.
– Tango

The animal spotting focus has shifted, natural wildlife being scarce. Domestic animals were mostly seen. Gadoi(?) dogs, almost bred to the point of being their own breed, sculked along the road oblivious to near misses by traffic. Life appears cheap in Africa. Donkeys and carts operate on sandy side roads. Villagers were spotted fishing with stick poles in water logged muddy holes. Water lilies grew wild and spectacular, carpetting ponds everywhere water was found. Beauty in the wild.
– Sierra 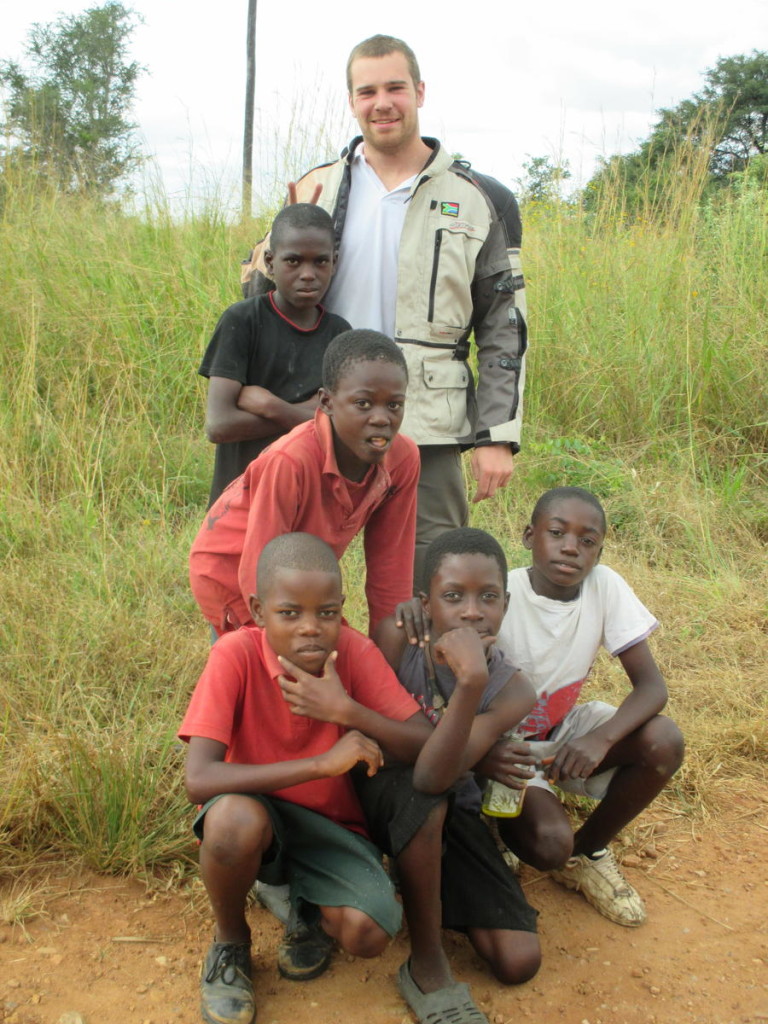 Gliding through the neat downtown area of Livingstone, with it’s rows of older shops and buildings interspersed with newer projects housing familiar South African retail brand names, we were soon on the T2 road north.
This was the start of what turned out to be a ten hour ride!
The scenery is remarkably similar mile after mile – thick elephant grass as tall as a man that grows right up to the edge of the road and endless forested landscape. There is no fencing or much evidence of agriculture, except for small patches of mielie stalks, but there are people, so many people.
Countless kraals and villages line the road and as we swept on north, their delight in seeing four guys on motor cycles was evident. Everybody smiled and waved and cheered as we passed.
Even at the frequent police stops, the exchange would go something like;

After a great nights rest in a comfy bed, we breakfasted and rode the bikes unladen, to the Victoria Falls Park site.
The river is high now and so the volume of water cascading over the falls is extraordinary. The thundering billowing spray that rains down on the onlookers is thrilling and we spent a happy morning here – just watching the endless brown cascading waters, walking on the bridge with the lines of bungi jumpers and curio sellers and then hiking down to the swirling water at the foot of the falls called the Devils Cauldron – truly a special place.
– Tango

At the accommodation there were a large number of vervet monkeys. They became a nuisance by stealing tea bags from our room in front of Trevor’s surprised face. Absolutely brazen and fearless.
We decided on a river sunset cruise, which turned out to be a really special bonus, game viewing wise. We were alerted to elephant and the skipper guided the huge ferry to within 50m of three elephant in the water on an island in mid-Zambezi river. This was followed shortly by a small crocodile sunbathing on the shore and then two huge hippo with their calf in the water which obliged by getting out of the water. All this with the African sunset as the backdrop, more real than the cliche African scene usually imagined. Once again, we were in the picture although it was technically sans bikes.

At the Vic Falls, a large troupe of baboons co-exist with the tourists. Huge males, pregnant females and toy-like babies clinging sauntered arrogantly past. Unthreatening, but wary and knowing lodged in their simian eyes. Any food spotted, one just knew they would pack attack you for it! We encountered large bats in the roof of our accommodation which swooped in and out with uncanny skill between the rafters.
– Sierra 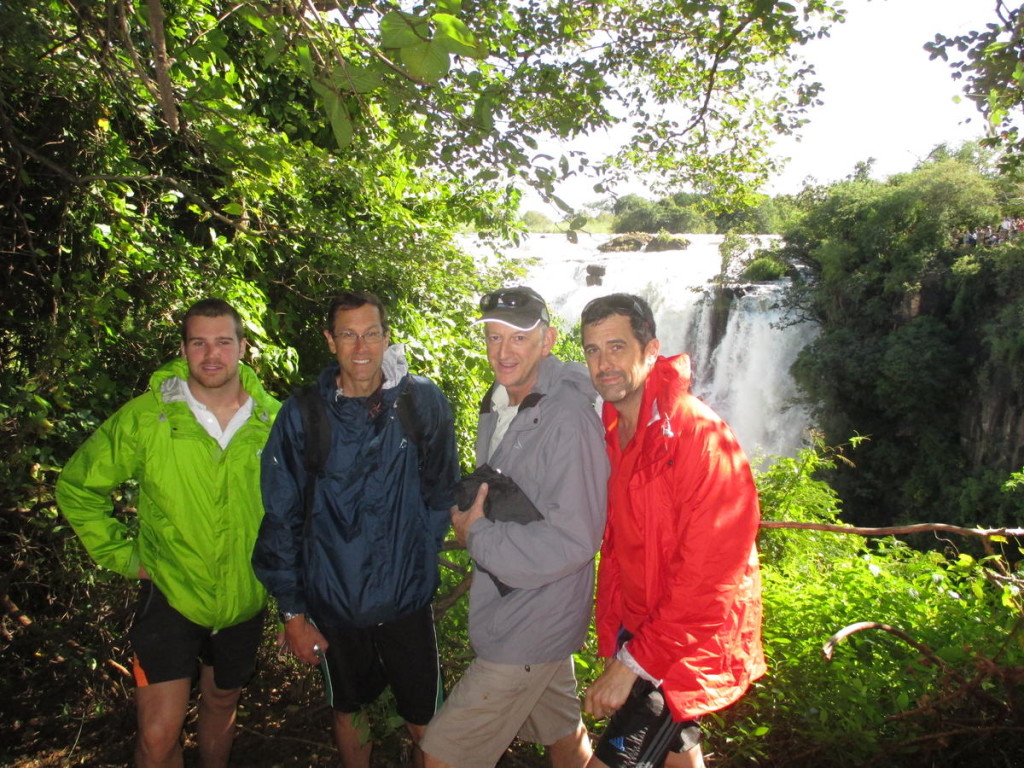 We breakfasted at the lodge and with after a bank stop for cash we headed for the border post just outside of town.
The Namibian immigration side was quickly dealt with and then on to the shiny new Zambian customs and immigration building which is before the bridge over the river. Entering Zambia is not a quick affair, but the authorities were very friendly and we even got a reasoanable rate from the exchange touts. About two hours later we were off and across the bridge over the mighty Zambezi, which is high and wide and very impressive and we started out on the 160 km journey to Livingstone, which was once the capital of Zambia.
The poor tired road is so pot-holed that traveling by car or truck must be a real test, but we had fun whizzing between craters and the last third of the distance was newly surfaced and thus swift.
We are to be here a couple of nights and have decided against camping and have negotiated a rate with a river-side lodge and plan to do some sight-seeing and recupertaion. We are all suffering from various ailments that are the reward of riding a small bike long distances…cramping shoulder muscles, bruised bums, sunburnt necks and the like.
– Tango

On the ride between Katima Mulilo, we saw lots of lala palms which locals use to make palm wine. At our short stops we heard African hoopoes call…’hoo-p, hoo-p, hoo hoo hoo hoo’ accelerating towards the end of the call. A small herd of buck was spotted which Garth believed were kudu ewes.
Having to dodge potholes made viewing difficult, however locals fishing in wet spots along the way meant there were fish and one local on a bicycle was spotted with fish dangling from the carrier under the baking African sun, no doubt a treat with his Nshima.
– Sierra 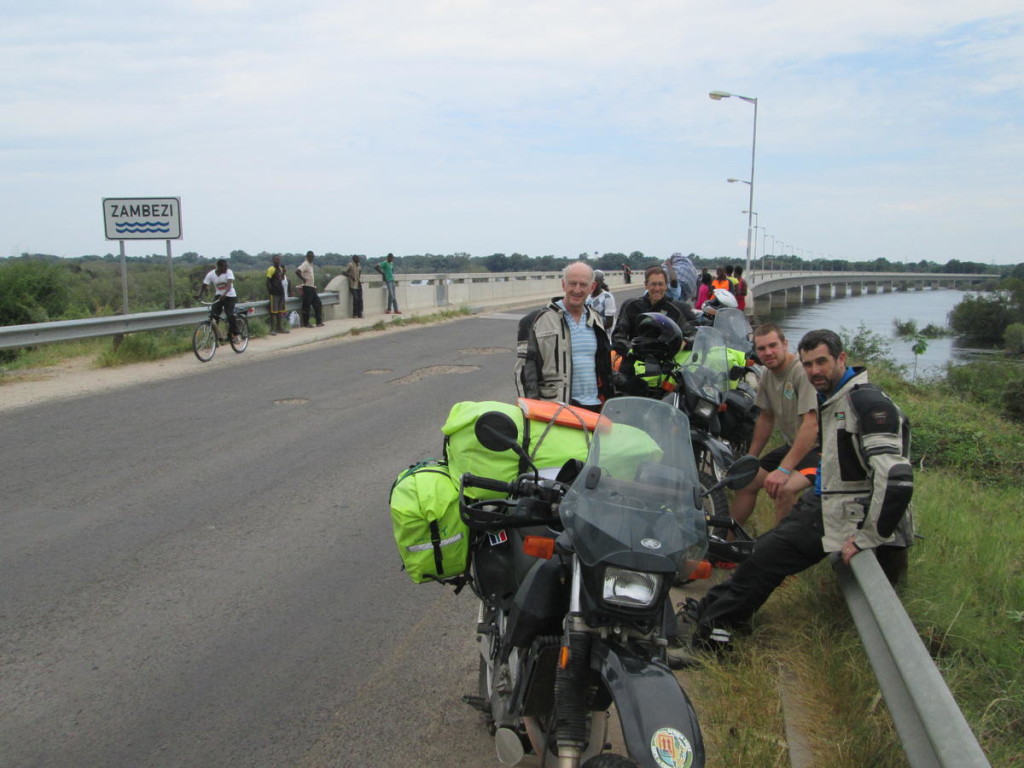 Across the Zambezi (we had to cross this bridge three times for some reason!)